So the versions of Inception in this post are defined as:

In the rest of the post, each version of Inception Network is discussed in one section.

As the name of the paper[1], Going deeper with convolutions, the main focus of Inception V1 is find an efficient deep neural network architecture for computer vision.

The most straightforward way to improving the performance of DNN is simply increase the depth and width. The main drawbacks of this method is the requirement of more data to overcome possible overfitting and more computational resource. The fundamental way to solve these 2 problem for computer vision system is to use sparsely connected architecture to replace the fully connected one.

…if the probability distribution of the data-set is representable by a large, very sparse deep neural network, then the optimal network topology can be constructed layer by layer by analyzing the correlation statistics of the activations of the last layer and clustering neurons with highly correlated outputs. Although the strict mathematical proof requires very strong conditions, the fact that this statement resonates with the well known Hebbian principle – neurons that fire together, wire together – suggests that the underlying idea is applicable even under less strict conditions, in practice.

In the feature map, each unit can be considered as the representation of some region of input images. The 1$\times$1 convolutional kernel can encode this single region for the next layer. However, there are other features which are composed of more single regions. So the 3$\times$3 and 5$\times$5 convolutional kernel as well as maxpooling are used in parallel. All these features are stacked at the end of this layer. Image 1 shows an example: 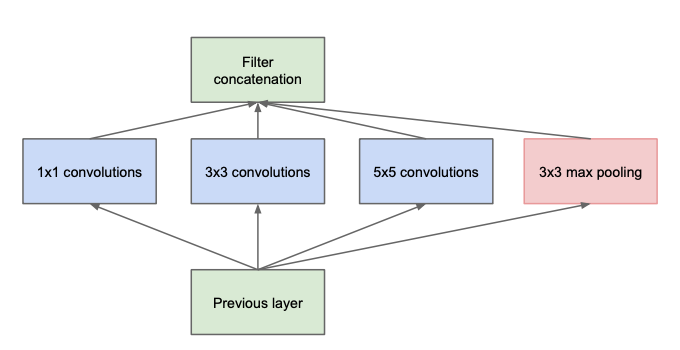 With the local structures introduced before, the computational cost is still very expensive. The author use dimension reduction by applying 1$\times$1 convotional kernel with less filters. Then feature maps are passed to 3$\times$3 and 5$\times$5 convolutional kernel. 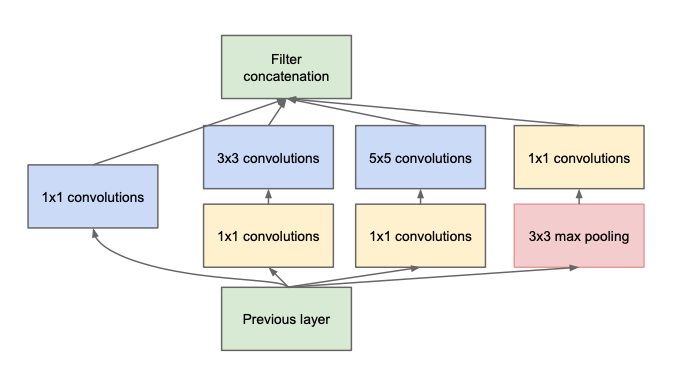 The paper for Inception V2 is Batch normalization: Accelerating deep network training by reducing internal covariate shift. The most important contribution is introducing this normalization. As stated by the authors, Batch Normalization allows us to use much higher learning rates and be less careful about initialization. It also acts as a regularizer, in some cases eliminating the need for Dropout.

In Inception V2, the authors first propose the problem named Internal Covariate Shift (ICS). Then they suggest several solutions and analyse their advantage and drawbacks. The details are explained below.

The change in the distribution of network activations due to the change in network parameters during training is defined as ICS. As inspired by the whitening technique for computer vision, we think the normalization to help training of the model. This is often performed to the input of the image. For example, the values of pixels of an image are normalized by subtracting the mean and being divided by the standard deviation.

Now, the question is can we do the same processing for all the internal input from layer to layer in a network.

In order to reduce the computation, 2 simplifications are used:

But this normalization weakens the ability of representation. In order to have the possibility to revert or slight change this normalization, we add 2 parameters $\gamma^k$ and $\beta^k$, which are learned by the network.

The algorithm of BN is shown below: 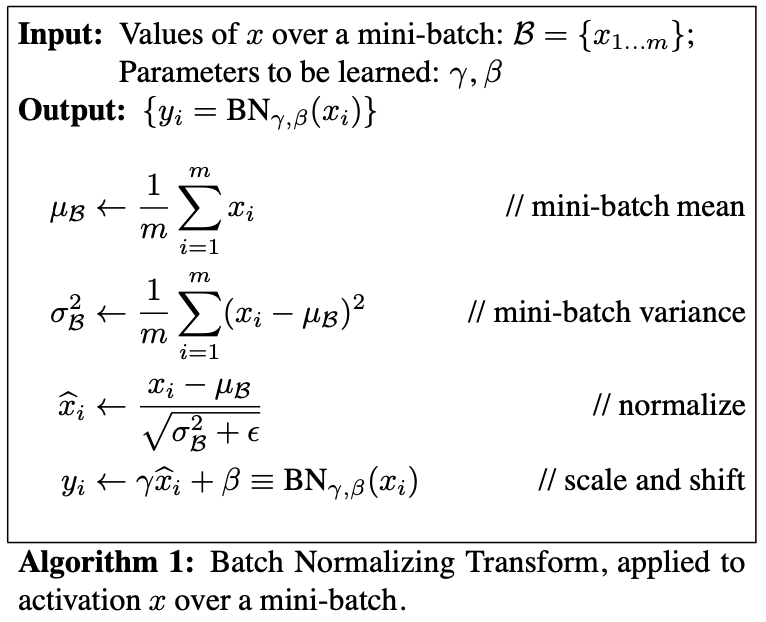 The full training and inference algorithm is as follows: 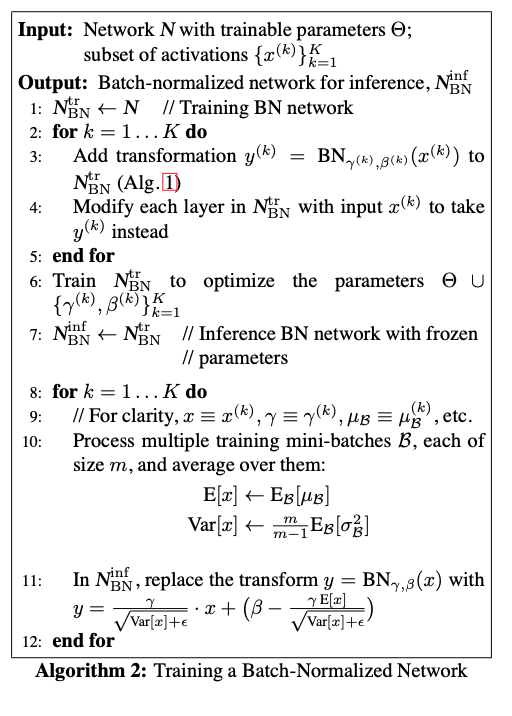 With version 1 and version 2, Inception have introduced sparse representation to reduce the calculation and batch normalization to speed up and stabilize the training. In version 3, the authors want to explore ways to scale up networks in ways that aim at utilizing the added computation as efficiently as possible by suitably factorized convolutions and aggressive regularization. They give some general design principles according to their large scale experimentation with various architectural. 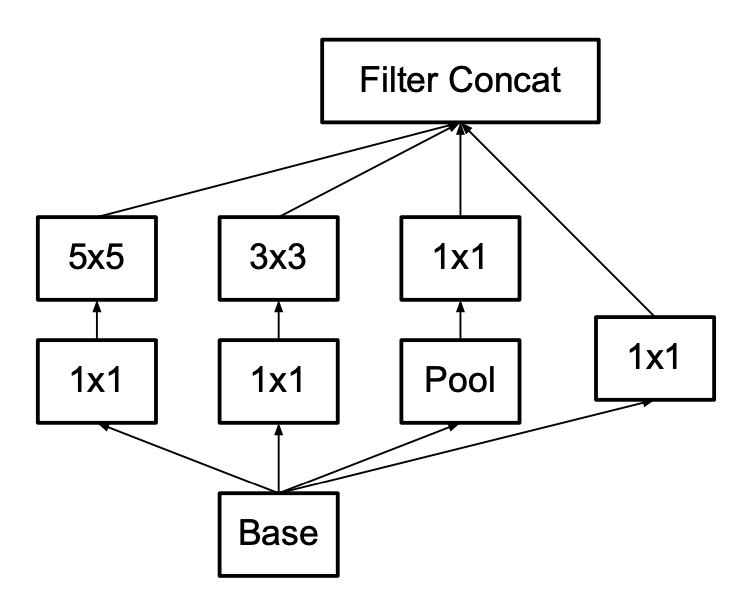 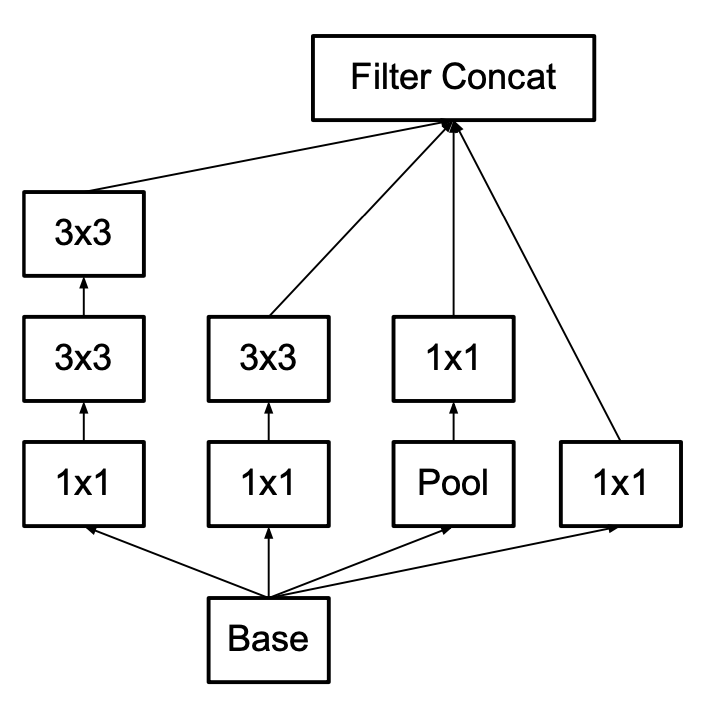 The authors indicate that one can replace any n × n convolution by a 1 × n convolution followed by a n × 1 convolution and the computational cost saving increases dramatically as n grows. Images below give an example: 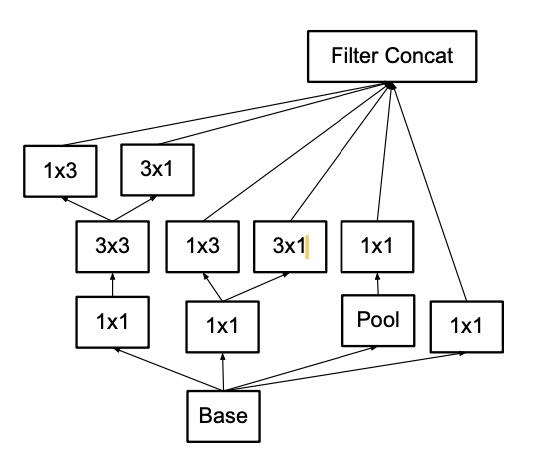 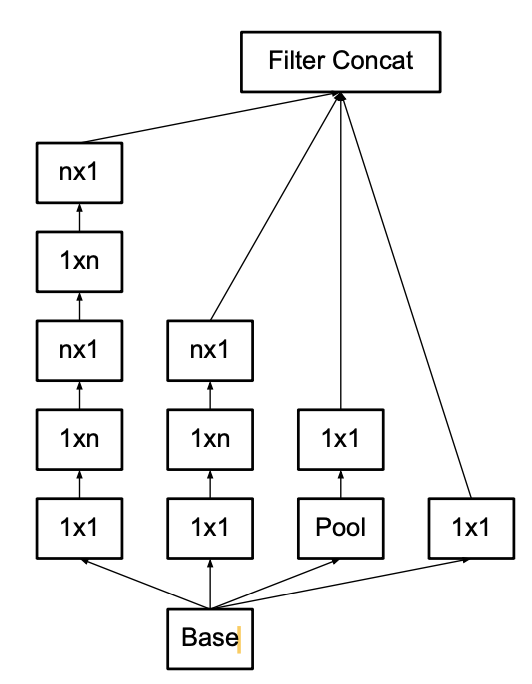 In cross entropy, the direct use the ground true to indicate the probability of certain class to 1 can cause 2 problems:

The label smoothing can be simply understood as lower the probability of ground true from 1 to certain value, 0.9 for example.

One simple way to ensure constant effort is to reduce the strides of the first two layer in the case of lower resolution input, or by simply removing the first pooling layer of the network.

The key contribution of Inception Network:

[4] Szegedy, Christian and Ioffe, Sergey and Vanhoucke, Vincent and Alemi, Alexander A   Inception-v4, inception-resnet and the impact of residual connections on learning   AAAI 2016